This gin was originally the result of a conversation between Cameron (our distiller) and Jason (then Manager of Sydney bars including The Rook and one of the World's Top Ten Bartenders) back in 2014 - they wanted to create a gin specifically for the Negroni. Something to cut through the Campari and vermouth. And as the Negroni has always been a favourite at Four Pillars, Cameron jumped at the chance to make the first collaboration in our Bartender Series a tribute to the very definition of a perfectly balanced cocktail. Four Pillars Spiced Negroni Gin is a highly aromatic, rich and (yes) spicy gin with great power and intensity. First, we took our base botanicals and upped the amount of Tasmanian pepperberry leaf and cinnamon. Then we added an exotic West African spice called Grains of Paradise. This is one of the most unusual spices in the world, with clove and sichuan characters. But although very powerful, the spice tends to glow rather than become hot.

26 January 2018
Got this for my husband, he was very impressed, tried it in a Negroni straight away
(5) 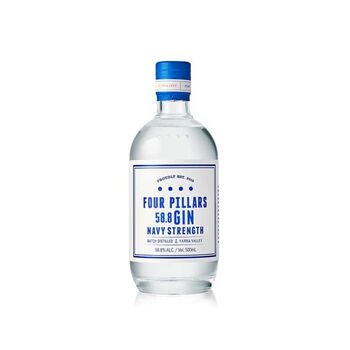